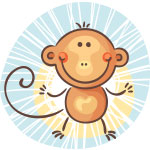 Fortune smiles on health and wealth, but a little elbow grease to help it along will double your dividends. Take a free ride when it's offered, but be willing to do your part to make it easier for all. It will do your reputation good to be known as someone who remembers who helped when times were harder.

While a New Moon will always bring one lunar month to a close while ushering in the next, the weekend's New Moon has also brought one lunar year to a close while ushering in the next. For the Monkey, this is something that partly relieves some of the pressure of the past 12 months, with the Year of the Tiger likely to have demanded a lot from you. However, while the Year of the Tiger ended over the weekend, the month of the Tiger began, with a Tiger Moon on Monday helping with the transition. This brings you to the halfway point in your current personal 12 month lunar cycle, but as you have just spent a year under the Tiger's influence this is more a chance to tie up loose ends. It is from Tuesday to Thursday that a Rabbit Moon will give you a chance to embrace the year of the Rabbit, with its focus on change and transformation.

While the year will get off to a busy start it won't stay that way, with a chance to pack as much into the first three weeks of the year as possible, whether that is getting things up to speed on the job front or getting stuck into any personal chores or tasks. With the busy, industrious and work focused month of the Ox ending on 21st January, there is a chance to pack as much into these final weeks as possible. This is the same New Moon that will bring the Year of the Tiger and its focus on your relationships to a close while ushering in the month of the Tiger. This will keep the focus on your relationships while bringing you to the halfway point in your current personal 12 month lunar cycle. This is the same New Moon that will usher in the Year of the Rabbit, which for the Monkey will be a big year for financial growth and expansion but also for change and transformation.

Colour of the day: Wheat